Next steps for city dual carriageway

Key stages for Sunderland's next major infrastructure project are being examined by the City Council's Cabinet. 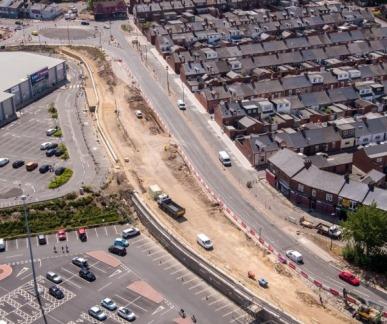 Phase 3 of the Sunderland Strategic Transport Corridor is a £70m dual carriageway from the southern bridgehead of the Northern Spire through Pallion, Deptford and linking into St Mary's Boulevard.

It is designed to create a new gateway into the city centre, reducing congestion and helping to open up more land for regeneration, and it received planning permission in October last year.

Cabinet meets on Wednesday 20 June and is looking at:

* approving an additional £11.8m towards the works.

The project is so far due to be funded with £42.1m from the Government and Department of Transport and prudential borrowing of £16.9m.

Latest estimates put the cost of the scheme at £70.8m following more detailed designs, land acquisition costs and for infrastructure support, such as utility diversions.

The report to Cabinet outlines how the £11.8m can be met with an underspend on the Northern Spire project and Central Government transport grant allocations.

Councillor Amy Wilson, the City Council's Cabinet Member for Environment and Transport, said: "All aspects of the SSTC are key parts of our city's future. By updating our highways and transport networks we improve connections between our communities; we have a better flow of goods and services into and across our city; we open up more land for new development, and we create opportunities for more investment and job creation.

"The Northern Spire's completion is imminent and this council's Cabinet is now looking to the next steps in our city's development with this important dual carriageway."

The planned SSTC3 route starts at its west end from the approach to the Northern Spire, taking traffic from there around the Pallion Shipyard site and under the end span of the Queen Alexandra Bridge.

It follows the line of the existing Deptford Terrace alongside the Ropery before heading across Simpson Street to junctions with Beach Street and Trimdon Street West.

Eastwards from there the new dual carriageway would overlay the existing Trimdon Street to modified roundabouts at Hylton Road and St Mary's Boulevard.

Subject to the Cabinet decision, and further permissions, works on diverting utilities and site preparation could begin through the summer.

The appointment of a contractor would allow full works to begin in 2019.

The SSTC programme is in five phases. These are:

More details on SSTC 3 are at: https://www.sunderland.gov.uk/sstc3