The impact of SSTC3 on potential archaeological and historic assets along the route of the new road has been an important consideration from the early stages of the planning process and throughout the pre-construction and construction phases of the project. 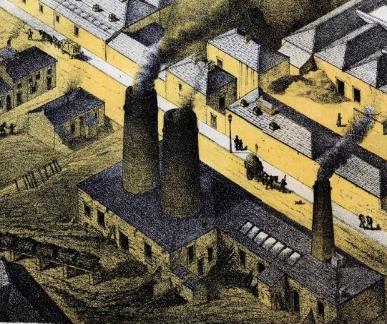 A phased programme of archaeological work has been carried out by Pre-Construct Archaeology, beginning with an historic environment desk-based assessment prepared in 2016. This work included a search of the Tyne & Wear Historic Environment Record, which lists all known archaeological and historic sites in the county, and an examination of historic maps and documentary material to assess the archaeological potential of the route of the road corridor.

The desk-based assessment determined that the principal archaeological interest of the road scheme related to industrial activity of 18th and 19th-century date. The route crosses the former sites of a brick and tile works, Deptford Chemical Works, Wear Bottle Works, various shipyards, Vulcan Iron Works, Lambton Railway, Sunderland Flint Glass Works, Trimdon Iron Works, Hetton Company Railway and a coal depot. It was considered possible that buried remains associated with these non-designated heritage assets may have survived within the route of the road corridor.

Towards the eastern end of the SSTC3 route is the Simpson Street School which comprised a Boys School on Wellington Lane, a Grade II listed structure which is currently being renovated, and an Infants and Girls School on Simpson Street which had to be demolished to make way for the new road. To mitigate the loss of this asset, historic building recording was carried out on the structure and a report produced detailing this work. The school opened in 1867 as Deptford Yard Church of England School, consisting of boys and infant's department.

From 1883 the school came under the control of Sunderland School Board and became Simpson Street Boys Board School with a separate building constructed as the Simpson Street Girls Board School. The school was closed in the 1960s and the Girl's School building was modified in the late 20th century when it was taken over by Sunderland Coachworks and Meat Direct premises. The interior of the building was essentially gutted, leaving few original internal features.

A watching brief at Trimdon Street in July 2019 revealed significant archaeological remains associated with the 19th-century Sunderland Flint Glass Works which survived at relatively shallow depths in the area between the eastern side of the road and the retail park. The main excavation of the glassworks site took place August to September 2019 with additional smaller areas examined between November 2019 and May 2020. The Sunderland Flint Glass Works was established in 1852 and is first depicted on the 1859 Ordnance Survey map which shows the glassworks in detail as an L-shaped structure with each room labelled.

The map shows a railway siding that would have delivered the raw materials for production such as sand and coal. The Sunderland Flint Glassworks produced blown flint glass, considered a luxury item earlier in the century. However, the business failed in 1858 within a few years of its establishment, and the facility was taken over by James Angus and Henry Greener; from this date documentary evidence indicates that the works was known as the Wear Flint Glassworks, although was still named as the Sunderland Flint Glass Works on the 1859 map. Angus and Greener shifted production to press-moulded glass items, a process which required the heated glass to be blown into a highly polished iron mould.

With the growth of the coal mining industry and following the abolition the glass levy in 1845, the production of glass in the region increased and Sunderland was established as a major contributor to the British glass industry. A combination of the nearby colliery infrastructure and coastal transport meant that glass could be manufactured in the Tyne and Wear area at a fraction of the cost of other areas such as London; materials such as flint and sand were often used as ballast in colliery vessels returning to the north east, providing a ready supply of raw materials for the glass-making industry.

By the time of the 1897 Ordnance Survey map the glassworks had been demolished and the land split between the Trimdon Iron Works to the north-east and an area of newly constructed terraced housing to the east fronting onto Trimdon Street. By 1946 Trimdon Iron Works has been demolished to make way for a power station. The terraced houses stood until the 1970s when they were demolished and Trimdon Street widened to incorporate some of the land formerly occupied by the housing.

The central and southern parts of the glassworks were exposed within the area of excavation. The factory had been largely demolished to ground level leaving elements of wall foundations, floor surfaces and subterranean features such as flues. Overlay of the recorded archaeological features onto the 1859 map has allowed the remains to be identified as various parts of the factory.

The structural remains included elements of a room labelled 'Glass House' which is shown on the 1859 map as containing two circular 'Cones' 6m in diameter; the bases of both survived. The cones were brick-built chimneys within which were the coal-fired furnaces for glass melting pots, heated via a network of underground flues vented via the chimney. An 1860's image of Hartley and Company's Glassworks, which was located adjacent to the Sunderland Flint Glass Works, shows the factory in the foreground and the chimneys of the two glass cones can be seen projecting from the roof of the Glass House. Elements of subterranean flue systems and a flue entrance to the south were also exposed within the excavation area along with part of the area labelled 'Annealing Kiln' on the map. Partially exposed structural remains of rooms at the northern end of the factory are labelled as the 'Store Room', 'Mixing Room' and 'Sand Depot'.

Fragments of glass vessels and glass production waste were recovered from the excavations which demonstrate the range of glass-working activities carried out in the factory (glass blowing and pressing) as well as the range of glass compositions in use (colourless flint, coloured flint, and uranium oxide glass). The vessel glass comprises a range of blown and cut drinking vessels, mainly tumblers and beakers, and many fragments of pressed glass. Fragments of the crucibles used for melting the glass were also recovered. Preliminary documentary research has uncovered evidence detailing the succession of owners, legal disputes with employees and incidents that took place in the factory and its showroom.

A report detailing the results of the excavations has been prepared and the final phase of work currently being undertaken by Pre-Construct Archaeology is the preparation of a paper for publication in Archaoelogia Aeliana, the journal of the Society of Antiquaries of Newcastle upon Tyne. As part of this work, analysis of the glass waste and products will be undertaken, including chemical analysis, as well as further documentary research. 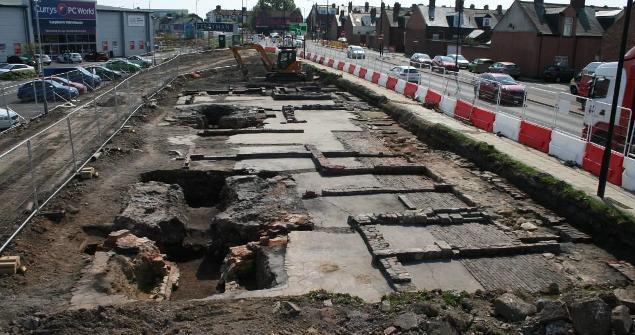 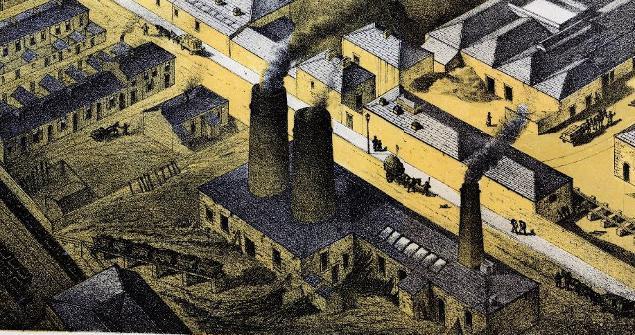 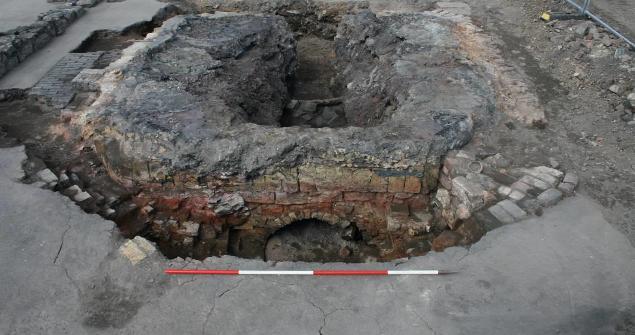 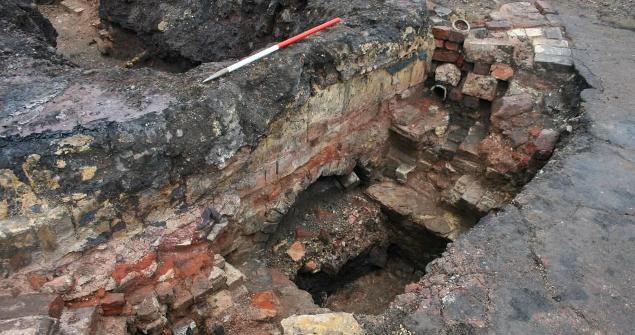 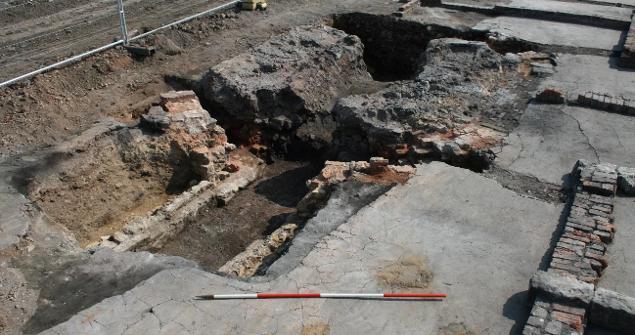 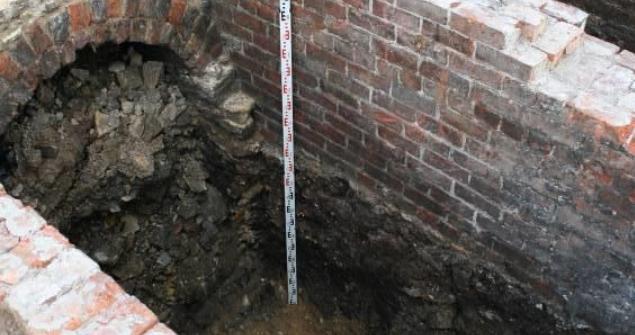 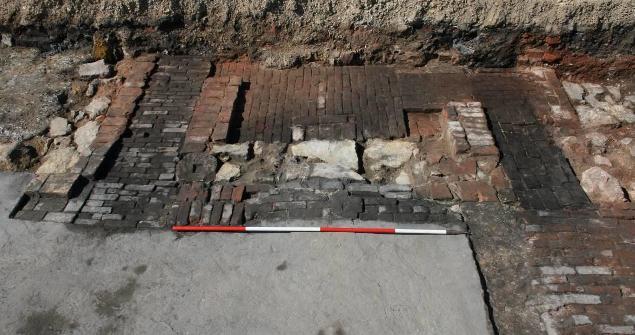