Beach-goers are being urged not to put their lives at risk by taking inflatables into the sea from Wearside's beaches and riverside. 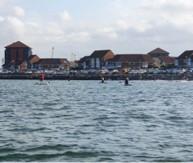 Safety organisations are particularly concerned about the use of Harbour Beach (between Roker and Old North Piers), which is not a designated bathing beach and where, unlike Roker and Seaburn beaches, there are no permanent lifeguard patrols.

RNLI Regional Water Safety Lead, Nick Ayers, said: "We always advise people to swim at a lifeguarded beach between the Red and Yellow flags. Never use inflatables when the orange windsock is flying, this signifies that the winds are too strong. If you do choose to use an inflatable at the coast, ensure that it is tethered to someone on land at all times. Inflatables can be picked up by the wind quickly."

The warning comes four years after a 17-year-old drowned in the harbour trying to save his friends after their inflatable began to sink.

Sunderland City Council staff crewing the Port of Sunderland's water patrol boat had to warn numerous people using inflatables off Harbour Beach last weekend over concerns about them getting into difficulty.

The boat patrols the River Wear from the harbour to Fatfield at weekends, during the school holidays and public holidays from Easter to September providing safety advice and guidance to water users.

Harbourmaster Captain Kevin Ullah, said: "Last weekend was particularly busy with a lot of people, including children, out in inflatable canoes, kayaks and on paddleboards, many of them not wearing suitable buoyancy aids or lifejackets.

"On the Saturday there was a particularly strong off-shore wind together with a dropping tide which had the effect of pushing people out to sea which could very easily have resulted in a tragedy.

"Inflatable paddle boards and kayaks have become really popular and people can now buy them quite cheaply and take them out to sea without having any idea of how to use them. But what they don't realise is that if they get a puncture they can very easily go under. The very last thing we want to see is another tragedy off our coast.

"Inflatables are not intended for use in the sea and other tidal waters unless they are securely tethered to the shore under the supervision of a responsible person. All water-based leisure activities should therefore take place from beaches where RNLI lifeguards are on duty.

"We're also finding inflatable users are even going beyond the piers to watch increased dolphin activity at sea. This brings increased dangers of dolphins capsizing inflatables should they approach too close, not to mention risks of the sea becoming rough or the winds strengthening.

"In all circumstances, anyone using the sea for leisure purposes must let someone know where they are going and when they expect to return to shore to allow the alarm to be raised should they not do so. They should also always make sure that they are carrying a means of calling for help."

RNLI Regional Water Safety Lead, Nick Ayers, added: "If you do get into trouble in the water, shout for help, stay with the device and wait for hep to arrive.  In any emergency at the coast call 999 and ask for the coastguard."