The number of workers earning the Real Living Wage in Sunderland could triple over the next three years under plans announced today by the City Council in partnership with the Living Wage Foundation and major city employers. 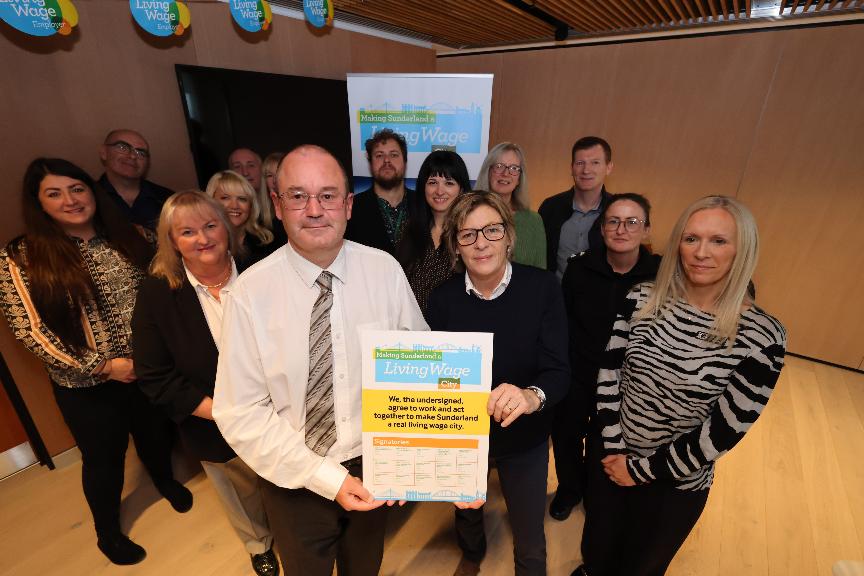 Sunderland is the first city in the north-east to be recognised for Making a Living Wage City by the Living Wage Foundation, which accredits businesses that pay the Living Wage - currently £10.90 - to their directly employed and contracted staff.

The alliance of prominent Sunderland employers - who are all accredited Living Wage employers - has been working together on a Living Wage Action Plan aimed at expanding the Living Wage in the city over the next three years.

Their action plan - launched at an event in City Hall today - sets out how the alliance intends to triple the number of workers covered by Living Wage accreditation in Sunderland over the next three years. This will result in 19,702 more workers in Sunderland receiving the Real Living Wage by 2025.

As part of the Living Wage Foundation's Making Living Wage Places scheme, local businesses and employers will be encouraged to pay employees the Real Living Wage and become accredited as Living Wage Employers.

A total of 18 employers headquartered in the city have already voluntarily committed to making sure that all their staff and subcontracted staff receive a Real Living Wage of £10.90 an hour, significantly higher than the government minimum of £9.50.

Councillor Graeme Miller, Leader of Sunderland City Council, said: "This is all about supporting our residents by making sure that they are paid a fair day's pay for a fair day's work, which is all the more important given the current cost of living crisis.

"For me becoming an accredited Real Living Wage employer was simply the right thing to do. Work should pay, or at least pay enough for people to live on, but this isn't always the case as we see people juggling multiple jobs, having to resort to using foodbanks and struggling to pay their bills.

"As a partner on the Real Living Wage Action Group, we are committed to encouraging more city employers to sign up to becoming Real Living Wage employers. This is also about keeping the £ in Sunderland in line with our City Plan and Community Wealth Strategy, investing in our residents and communities and supporting them to be financially resilient."

Val Barron, Chair of Living Wage Action Team at Tyne and Wear Citizens, said: "Since founding 6 years ago, Tyne and Wear Citizens have listened to communities and consistently heard how in-work poverty has a real impact on people's lives. I witness the stress and anxiety that low pay causes in my regular work in foodbanks and know that employers can make a difference through real Living Wage accreditation.

"We have been working to increase the number of accredited real Living Wage employers in the region and are so excited that Sunderland City Council is the first local authority in the north-east to accredit. We're delighted that they're going further and working in partnership with others, to make Sunderland a Living Wage City.

Andrea Walters, University Secretary at the University of Sunderland, said: "We are delighted to become an accredited Living Wage Foundation Employer. This has had a positive impact on almost 300 individuals.

"As one of Sunderland's largest employers, we are committed to supporting the city-wide campaign to support local wealth creation by becoming a real living wage city."

Katherine Chapman, Director, Living Wage Foundation said: "The Living Wage Foundation's Making Living Wage Places scheme recognises groups of major local employers such as universities, sports clubs and local authorities that not only pay the living wage to their employers and contractors, but also use their influence to spread Living Wage accreditation through their local area. This increases Living Wage jobs, providing more workers with a fair day's pay for a hard day's work."