Builder prosecuted for failing to clear up waste

A man has been fined for failing to comply with a Community Protection Notice, which required him to clear up building waste that was being stored on his land. 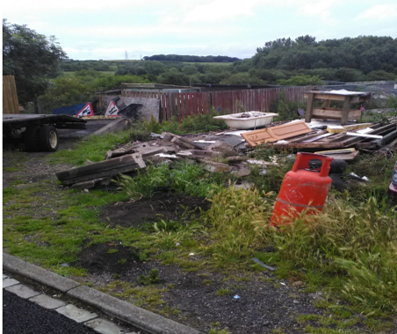 For a number of years Stuart Shields of Victory Street East, Houghton le Spring, used his garden to treat and store his building and construction waste.

Stuart Shields of Victory Street East, Hetton-Le-Hole, pleaded guilty to breaching the notice in South Tyneside Magistrates' Court on 18 May 2022.

Local residents complained of an accumulation of waste, mainly building materials, where regularly being deposited within the curtilage of an address on Victory Street, which was then being set alight.

Sunderland City Council's Neighbourhood Enforcement Team commenced an investigation into the occupant of the address. Evidence was found showing that Stuart Shields was depositing and storing waste from his building business in and around the area, with some being buried and burnt at property.

Environmental Enforcement Officers found evidence that this had been occurring for a number of years, which was a blight on the local community.

Stuart Shields was then issued with a Community Protection Warning by Sunderland City Council, which clearly set out what action needed to be taken by him.

After officers found that Mr Shields had made no attempt to rectify the situation, he was prosecuted.

He was fined a total of £500 for breaching the Community Protection Order and ordered to pay £50 victim surcharge, £325 costs and £75 legal costs.

Sunderland City Council's Deputy Leader and Cabinet Member for Environment and Transport, Cllr Claire Rowntree, said: "It's a real shame that a small minority of people refuse to dispose of their waste responsibly. I hope the fines issued in this case send a clear message that we will not tolerate this kind of anti-social behaviour in our neighbourhoods."