A 60 metre (nearly 200ft) section of quayside is being rebuilt and strengthened with more than 340 tonnes of steel. 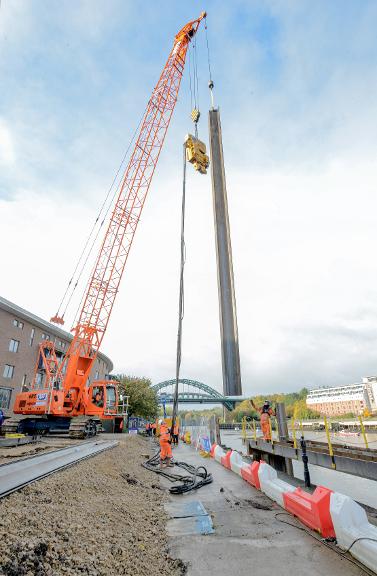 Altogether, 133 steel piles, each weighing 2.6 tonnes and 18 metres long (nearly 60ft) are being driven into the bed of the River Wear for the new stretch of Panns Quay East.

They are replacing corroded piling that had been in place since the early 70s and slipped into the River Wear in March 2021 as they reached the end of their design life.

Preliminary and salvage works to clear debris and prepare for the new piling were completed through spring and summer. Works on the rebuild will continue into the New Year and a budget of £1.5m has been allocated.

The City Council's Cabinet Member for Dynamic City, Councillor Kevin Johnston said: "Council engineers and contractors had begun looking at options for this section of the quayside after we had received reports or cracking and splits in the footpath.

"These studies into what was causing the faults were underway when it fell into the river back in March.

"We've since had salvage crews, including divers in the river, clearing the debris and preparing the riverbed for the new steel piling and a new section of quayside.

"All of our city's infrastructure is hugely important, whether it's bridges, highways, or the quayside.

"In coming weeks, as works are completed, we'll have this section of the quayside back open so residents and visitors can enjoy it again."

The piling and reconstruction are being completed by County Durham company Arm-Pipetek.