Sunderland residents are being asked to share their views on buses in the North East as part of a campaign to improve bus travel in the region. 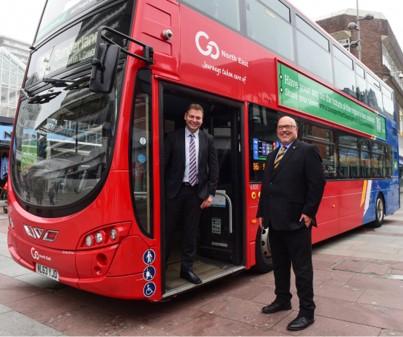 The Big Bus Conversation aims to gather the thoughts and opinions of members of the public and businesses about what they would like to see from a new and improved bus network.

The campaign, launched by regional transport leaders, will then use the feedback in their bid to access a national £3bn funding pot to encourage people to travel by bus.

Today (3 September) a bus was parked up at Market Square until 4pm, where people in Sunderland City Centre could share their thoughts and opinions.

Sunderland City Council is working with other local authorities and bus operators to create a new partnership that will revitalise the local bus network, but senior transport leaders are asking for the public to get involved and have their say.

The North East Joint Transport Committee with the local bus operators' association NEbus, have created 'Your Vision for Buses' - a document which sets out how they would like the bus network to look in the future, but they want the public to share their views.

Martijn Gilbert, Chair of NEbus, the local bus operators association, said: "We have an exciting opportunity to deliver a transformational bus network as part National Bus Strategy, adapting to new changes in travel demands and helping to support our towns and cities, as well as delivering important improvements to air quality.

"We want the voice of the community to help shape these plans, and the big bus conversation is being supported by our Local Authorities and Bus operators to engage with everyone, regardless of if you currently use the bus or not, to help us draw up plans that everyone can benefit from and make us a better connected, greener and more successful region to live and work in."

Leader of Sunderland City Council, Councillor Graeme Miller, said: "The council is proud to be backing the Big Bus Conversation; encouraging more people to leave their cars at home and use public transport to travel around Sunderland is a great step towards our ambitions to be a carbon neutral city by the year 2040.

"Now residents can have their say on what they feel is working and what they would like to see improved. The more people who share their views, the better the service can be so I would encourage everyone to get involved and submit their feedback."

The Big Bus Conversation will gather feedback from stakeholders across the North East ahead of the production of the Bus Service Improvement Plan (BSIP) which will be submitted to the Department for Transport in October. The BSIP sets out proposed plans for the EP, a formal partnership agreement between local authorities and bus operators which outlines how the network will look, feel and operate in the future.

To find out more about the Big Bus Conversation or submit your feedback or suggestions visit www.transportnortheast.gov.uk/bigbusconversation before 10 September.