A 27 tonne electric refuse collection vehicle (eRCV) is starting its rounds in a 24-month trial. 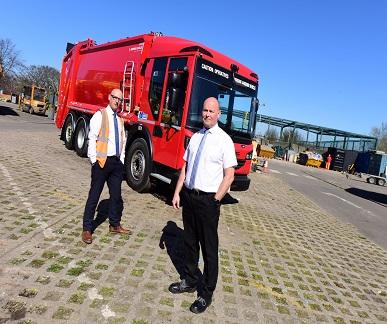 The Dennis Eagle eCollect has joined Sunderland City Council's growing EV fleet that is helping to reduce carbon emissions, keep the air cleaner, and be more cost-effective and efficient for council-tax payers.

It is understood to be the first of its kind in the North East region.

Sunderland has already set out its ambitions to be a carbon neutral city by 2040 with a Low Carbon Framework to drive down emissions.

As it begins its rounds with two loaders and a driver, the Dennis will be collecting approximately 20 tonnes of waste daily and is expected to clock up 10,000 miles every year.

The vehicle has cost £423,000 - including a contribution of £120,000 from the European Regional Development Fund (ERDF). The trial will be comparing the Dennis eRCV against that of an identical conventional diesel one to look at how they perform against each other.

It is anticipated that lower running costs in relation to fuel and maintenance can be offset against the initial purchase cost. The council will be able to monitor how it performs in 'real life' activities and over an extended period of time as opposed to a shorter-term 'test drive'.

The City Council's Executive Director of Neighbourhoods, Fiona Brown said: "The council is making a difference with carbon reduction as we continue updating and transforming our waste and recycling services. The purchase of this vehicle is a very visible and physical demonstration of this council's commitment to carbon reduction while serving residents.

"We are aware of the benefits that EVs bring and can now look more closely how this vehicle performs and the service it can deliver.

"As the new Pallion household recycling centre comes onto stream, as we update our Parsons Depot, and now with this new vehicle trial, residents can see how our front-line services are becoming carbon neutral."

Over the next 24 months the Dennis will be used across the city to test its suitability in different neighbourhoods, such as on gradients or in terraced streets.

Ian Bell, the council's vehicle fleet manager, said: "This is a very physical demonstration of the council's continued commitment to clean air.

"EVs are good for the environment and recognised as saving money. This is not just in fuel costs because, when compared with older fossil fuel vehicles, EVs are also generally less expensive on servicing and regular maintenance, so there are could be many benefits for residents, for the council and our staff.

"A lot of demands are put on our refuse and recycling vehicles so it's very important in coming months we understand and evaluate the performance of this type of vehicle. The council can then make further informed decisions about the viability, performance and range of these vehicles."

The Dennis and its charging infrastructure form part of the wider council initiative which has made provision for other electric commercial vehicles. This already includes a fleet of 29 Nissan NV200 electric light commercial vehicles used by neighbourhoods and highways staff, and a Nissan Leaf which is used as a pool vehicle.