Work to widen the carriageway at Trimdon Street is set to be completed three months ahead of schedule as construction of the third phase of Sunderland Strategic Transport Corridor (SSTC3) gathers pace. 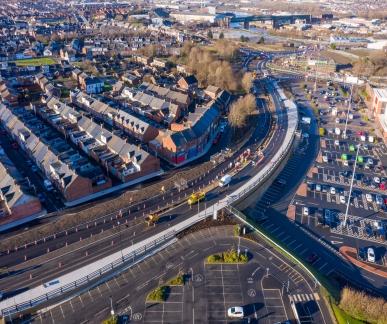 WORK to widen the carriageway at Trimdon Street is set to be completed three months ahead of schedule as construction of the third phase of Sunderland Strategic Transport Corridor (SSTC3) gathers pace.

The latest key milestone on the Sunderland City Council scheme has seen the Trimdon Street westbound carriageway open to motorists.

Now the final phase of construction work from Riverside Sunderland to Pallion New Road is well underway and due to be completed in early Summer.

The remaining phases of work will concentrate on linking the new carriageway from Trimdon street through the former Pallion Shipyard and link to the Northern Spire bridge. The overall project remains on track to be completed and fully opened in Autumn 2021.

Councillor Paul Stewart, Sunderland City Council's Deputy Leader, said: "This is a significant milestone in a project that will be an important part of Sunderland's future.

"Improving connectivity and transport goes hand in hand with the upcoming Riverside Sunderland development and this new dual carriageway is a key part of that, so I am delighted to see the project hit another milestone despite the challenges we have all faced over the last few months."

Steven Garrigan, Project Director at Esh, said: "The opening of the westbound carriageway on Trimdon Street is a fantastic achievement for the team on SSTC3. Despite the difficulties presented by Covid-19, as well as the logistics of working close to the retail park, local businesses, surrounding residential area and maintaining two-way traffic on this main city route, the works remain on course for Trimdon Street to be completed three months ahead of programme - a testament to the huge collaborative effort and determination of the project team."

The SSTC3 project - which is being delivered by Esh Construction's civil engineering division, Esh Civils, on behalf of Sunderland City Council - will create an uninterrupted dual carriageway linking the Northern Spire bridge and the city centre. It forms part of the £70.8m investment by the council to establish a strategic public transport corridor which is aimed at connecting communities to the city centre and relieving congestion while also improving business links.

Riverside Sunderland will transform a part of the city that has vast potential. Its masterplan captures a number of ground-breaking projects to reimagine this part of the city and sets out how the council will kick-start the rebirth of a 33.2 hectare site on both sides of the River Wear, creating the UK's first carbon-neutral urban quarter, building 1,000 new homes and creating office space for up to 10,000 workers.

The Riverside Sunderland masterplan has also set out plans for: