An abandoned waste site is to be transformed into use as a key manufacturing site after being bought by Sunderland City Council. 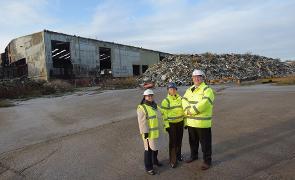 Liebherr Sunderland builds maritime cranes and cargo handling equipment from its base on the banks of the River Wear. This is adjacent to the privately-owned waste site which has been closed since business operator, Alex Smiles went into administration in 2015, leaving an estimated 30,000 tonnes of waste on site.

Sunderland City Council has been working with the Environment Agency for some time on a long term plan to bring the site back into use as a base for manufacturing. These plans suffered a setback following a major fire at the site in May 2018, which took more than three weeks to extinguish.

After pressing ahead with plans to acquire the site, the City Council took possession of the land on Thursday 12 December.

Work to clear the remaining 11,000 tonnes of mixed waste and restore the land will begin once a waste contractor has been appointed.

Following this, the site will be leased to Liebherr which is looking to expand its Sunderland base employing 200 people in highly skilled jobs. Liebherr founded its company in 1988 and Liebherr Sunderland Works Ltd. produces Reachstackers and Harbour Mobile Cranes. The company will also be part funding the clearance of the site.

Council Leader, Councillor Graeme Miller, said: "Without council intervention this abandoned waste site would have continued to be a fire risk and a liability for both residents and the City Council.

"Acquiring the site has allowed the council to bring a strategically important employment site back into use, safeguarded the continued presence of a long established manufacturing company in the city and create further employment opportunities.

"As well as securing an asset for the future this will also regenerate an unused site that otherwise could have stood empty for decades and posed significant risks."

Catherine Saxon, Environment Agency, Area Director - North East, said: "This is really positive news for Sunderland and the local environment. We have been working closely with the City Council to facilitate the project. This partnership will enable the abandoned waste to be removed and reduce the risk of further incidents.

"Over the duration of the site clearance we will be liaising with the chosen contractor to help minimise the impact on the environment.

"The resulting works will benefit residents, businesses and the local area."

Ralph Saelzer, Managing Director of Liebherr Sunderland Works Ltd, said: "In very close cooperation with Sunderland City Council and with the backing from our owners it was possible to use this unique opportunity to secure the site which will give us the potential for further development of our business."

The works will begin in January and will take approximately 12 weeks to complete. They shouldn't result in any major delays on local travel or transport in the Sunderland area.