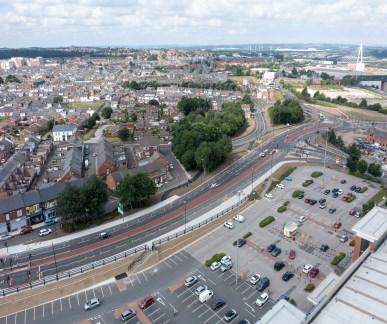 The Sunderland Strategic Transport Corridor (SSTC) is a continuous dual carriageway link between the A19 and the city centre.

Phase 3 (SSTC3) is the critical 2km link between the Northern Spire and the city centre, due for completion in Autumn 2021.

The overall scheme cost is £70.8m, a substantial investment in the city. Over half of this value is incorporated into the main construction contract. Land acquisition, diversions of buried services, design, project management and risk allowances make up the remainder.

The council have successfully attracted £40.5m funding from the Department for Transport (DfT) via the Local Growth Fund (LGF) provided through the regional Local Enterprise Partnership (LEP). These bodies are key partners in the scheme.

The construction contract was awarded to local civil engineering specialists Esh Civils and is one of a number of projects designed to bolster the economy in the city.

The project has also supported a large number of local jobs, with 53% of employees working on the scheme living within 20 miles of it.

SSTC3 begins at the southern end of the Northern Spire and continues through Pallion, then underneath the Queen Alexandra Bridge, into Deptford and onto the city centre and St Mary's Boulevard.

The scheme's design takes into account the land's former use, its geology and gradients and includes the construction of 1.2 miles of retaining walls and structures that will be nearly 40ft high.

Preparations are well underway for the delivery of SSTC 3 which is vital to fully open up the regeneration opportunities of development sites in Pallion, Deptford, Farringdon Row and other sites to the South of the river

The benefits brought to the city by the scheme include:

The SSTC3 route runs on an approximately West/East alignment South of the River Wear, between Northern Spire and the city centre. From West to East, key features of the route include: