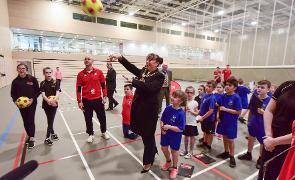 SPORT AS THE UNIVERSAL LANGUAGE is being used to help promote better understanding between schools in Sunderland and its French twin town of Saint-Nazaire.

The EU-funded ERASMUS+ project is a partnership between the two communities, bringing six Sunderland schools alongside the Foundation of Light and the City Council together to work with their French counterparts.

They are all sharing experiences and ideas on how to maintain healthy lifestyles to improve not just quality of life, but also classroom achievement.

The three-year E-SCHOLAR project is taking that partnership another very athletic, sporty step forward this week, with a focus on the important role health and exercise plays in young people's physical, emotional and personal development.

Led by trained staff from The Beacon and Foundation of Light experts, Year 9 junior sports leaders from the two secondary schools involved in the project (Kepier and Oxclose Academy) also took part to improve their own coaching, leadership and mentoring skills with the younger children.

Sessions included a carousel of activities with both work on physical fitness and workshops on Personal, Social and Health Education through the Primary Stars programme.

"Days like today, however, are some of my favourites. We have had more than 200 children here at the Beacon of Light, really getting the most out of our new facilities and it has been great to see the young people from the six Sunderland schools brought together to take part in practical activities.

"Today they have both continued work on their physical fitness as well as learning more about how to look after their wider health in the long term.

Liz Barton-Jones added: "The 30 secondary school young leaders have done a fantastic job helping us to deliver these sessions, and I think they have got a lot out of it too.

"The next step is going to be sharing these results with our colleagues in Saint-Nazaire.

Now in its final year, the E-SCHOLAR project has several more visits to and from Saint-Nazaire planned. Two of these will see pupils from the four secondary schools travelling to meet the counterparts they have been working with virtually these last few years.

The project leads are continuing to work with partners across the city including Together for Children and Washington Mind. They plan to share their learning as widely as possible across both Sunderland and Saint-Nazaire.

The Mayor of the City of Sunderland, Cllr Lynda Scanlan, who went to support the schools' sports day at the Beacon of Light said: "It is wonderful to see these learners so enthusiastically putting what they have been learning into practice.

"I was fortunate to meet with some of the project partners when I was in Saint-Nazaire this summer and to see first-hand the work that they are delivering in parallel in France.

"This year is the 65th anniversary of our partnership, and I'm delighted that young people and education continue to be at the heart of our joint activities."

The Mayor added: "The close relationship we have developed over the decades has allowed us to work on many different areas, and it is clear that health is a real priority for both our communities."